The Dragoncillo puppet troupe is the brainchild of Jason Yancey (Grand Valley State University), Esther Fernández (Rice University), Jonathan Wade (Meredith College), and Jared White (Buena Vista University), a group of scholars who specialize in Golden Age theater. The troupe is a collaborative effort, with specialists from across the United States combining their knowledge and talents to stage adaptations of entremeses, short comedic skits played in the act breaks of full-length plays in the sixteenth and seventeenth centuries. The company is dedicated to presenting an innovative, tongue-in-cheek take on the classics that is sure to delight audiences of all ages.

The group hit the ground running in April 2018 with a debut production titled “The Fabulous Johnny Frog,” a shadow-puppet piece based on Juan Rana, an actor/character who was an extremely popular figure in the entremeses. Based on five short works originally written by various playwrights, including Pedro Calderón de la Barca, the play seamlessly blends together the stories in the skits with puppets designed and built by Jason Yancey. The production enjoyed successful presentations at the AHCT Symposium in El Paso, Texas, at the Latin American Film Festival, and in Grand Rapids, Michigan.

Their next production, titled “Second Hands and the Ladies’ Man” and set to premiere in 2019, is based on two entremeses by poet and playwright Francisco de Quevedo. The play will be featured at the AHCT Symposium, at the Latin American Film Festival, and at Buena Vista University.

The troupe’s commitment to imaginative storytelling that educates as well as entertains means that each season will include performances in local public schools, exposing young audiences to the wonders of Golden Age Spanish theater. In 2018 Dragoncillo performed in public schools in El Paso, TX and Grand Rapids, MI; 2019 will bring performances to El Paso, TX; Grand Rapids, MI; and Storm Lake, IW. 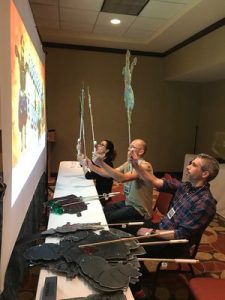 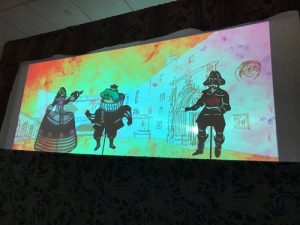