License to Love: A Review of Labyrinth of Desire

Can I love this person? This question is at the center of Caridad Svich’s Labyrinth of Desire, translated and adapted from Lope de Vega’s seventeenth-century La prueba de los ingenios. Laura, an aristocratic heiress courted by three suitors, finds herself falling for her secretary, Diana, who claims to be Felipe, a man in female disguise. Laura’s confusion is not over her affections—of that there is no doubt—but whether her love is permissible. Conflicted over the demands of convention and attraction, she asks her lady-in-waiting, “Can I love this person?”

The force of same-sex desire drives both Lope’s original and Svich’s modern remix, recently directed by Denise Blasor at USC’s Scene Dock Theater. In Blasor’s high-energy production, would-be lovers flit in and out of a courtyard, often colored by the pinks and purples of David Hernandez’s lighting design. Open-arched windows suggest, in Mallory Gabbard’s clever stage set-up, that our desires are never fully private. The stage floor is marked with a maze that seems to have no entrance or exit, just countless Pacman lines leading to dead ends. On occasion, the stage becomes a dancefloor, as pop-music interludes keep the mood light and punctuate the serious business of finding somebody to love. The beat goes on.

The dizzying plot involves the quest for the hand of Laura, played with directness and sincerity by Megan Goodman. Alejandro (Dominic Piccinini), Paris (Brian Yoon), and Ricardo/Infante (Harley Douvier), a trio not lacking in confidence, travel to Ferrara to win the lady over. Yet Florela, Alejandro’s spurned lover, intelligently played by Christina Braa, is determined to prevent Alejandro’s success in courting Laura. She shows up in Ferrara, calling herself Diana and asking to serve Laura, like Viola in Shakespeare’s Twelfth Night. As secretary, Florela/Diana develops a series of tests for Laura’s suitors in order to prevent Alejandro and Laura from ending up together. A profound friendship—and then romantic desire—develops between the women, which is complicated by Florela/Diana’s claim that she is actually a man, Felipe.

The brilliance of Lope’s—and Svich’s—device is that unlike the myriad cross-dressing plots in early modern drama, Florela/Diana does not rely on a costume in order to gender-bend. She is, rather, a woman who pretends to be a man disguised as a woman. This is the cross-dressing plot taken to its logical limit: if gender is performance, perhaps an utterance serves as well as a pair of pants. Braa makes fine use of this comic potential, deepening her voice and man-spreading like that oblivious dude on the city bus, while Goodman’s incredulity and dawning desire, as she watches and wants her mysterious secretary, are moving to the audience.

Like a late-night club where everyone on the floor is dancing and kissing while two serious lovers quietly converse in the corner, Blasor’s production moves swiftly between the modes of comically erotic romp and dramatic inquiry into the varied shapes of intimacy. Shrey Bhargava as the loquacious Camacho and Shelby Corley as the oversexed Finea, servants to Alejandro and Laura, respectively, provide plenty of laughs, and it is fitting that they end up together, stumbling through the doors hand in hand and walking off the stage at the end. In Blasor’s production, while the two comic figures exit, Florela and Laura, center stage, spin and dance with joy. 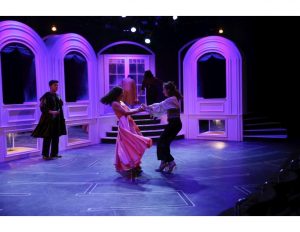 The conclusion of the drama is where Svich most rewrites Lope and where Blasor most rewrites Svich. Perhaps surprising to modern audiences, the intensity of same-sex desire is present in Lope’s original, with Laura talking of Diana/Felipe as her husband and, at one point, the two flirtatiously discussing what s/he might do with her hands (Svich renders this as, “I’ve no doubt your hands can work wonders”). Yet such homoerotic banter cannot be the final word in Lope. In the ultimate imperative to couple off his characters—how often early-modern comedy is a party where no one goes home alone—the Spanish dramatist unites Florela with Alejandro, Laura with Paris, and Finea with Camacho. Svich follows Lope but adds an extra pairing: Ricardo/Infante, unsuccessful suitor to Laura, finds himself with Estacio, servant to Paris. Svich’s adaptation thus gives the theme of honor its due while reaffirming the fluidity of desire.

Blasor’s production cleverly takes the theme of desire even further than its sources. In her version, Laura and Florela remain together, which is, of course, what the audience wants. Another way out of a labyrinth is to tear down its walls. All here find a partner, even Paris and Alejandro, who walk offstage, in a final comic moment, flanking Laura’s mother, the Duchess of Ferrara.  Blasor states in the playbill that “the most important lesson in this play is that we learn, that once again, love induced errors occur in any century and true love challenges all boundaries of human desire.” We do not love man or woman; we love Florela, or Felipe—a person.

For those interested in the comedia—I see you out there, blog-readers—I’d add another take-away from Blasor’s fantastic production. These plays, rich with complex female roles, are not stodgy arguments for conventional morality, drenched in outdated notions of honor. They dramatize the same maddening and exhilarating questions of gender and identity that we struggle with today. If you think Golden Age Spain did not understand homoerotic or unlicensed  desire—can I love this person?—think again. Then put that sexy stuff back on the stage.