Get ready for A Wild Night in Toledo! - Diversifying the Classics
22834
post-template-default,single,single-post,postid-22834,single-format-standard,vcwb,ajax_fade,page_not_loaded,,select-theme-ver-2.4,wpb-js-composer js-comp-ver-6.8.0,vc_responsive
December 7, 2018 In Uncategorized

Get ready for A Wild Night in Toledo!

We are excited to announce the second publication in our series The Comedia in Translation and Performance.In Lope de Vega’s A Wild Night in Toledo characters of all stripes mingle from dusk to dawn. Amid passion, trickery, and greed, no one sleeps a wink on this wild night, all in the name of love. Though set in Toledo, a city strongly associated with Spain’s Catholic tradition and imperial power, the play places officialdom in the background and lets the Spanish people take center stage. They devote their energy to what they really care about: intrigue, love, and sex. Social hierarchies dissolve, and it is as lovers that the players reveal themselves in earnest. Military officers, ladies, gentlemen, and their servants—all are looking for love, with often hilarious consequences.

Published by Juan de la Cuesta, A Wild Night in Toledo is the first in a series of full-length plays translated into English as part of the Diversifying the Classics project, dedicated to fostering awareness and appreciation of Hispanic classical theater among actors, students, and theatergoers alike.

For more information on the publication series go to: http://www.linguatextltd.com/IMPRINT_Cuesta/index.html 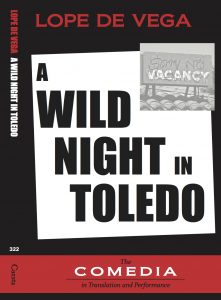