Dramaturgy and Collaboration at LA Escena 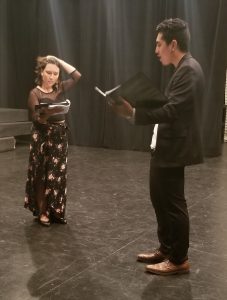 In the moments leading up to LA ESCENA’s performance of Women and Servants, directed by the wonderful and talented duo of Sylvia Blush and Jean Carlo Yunén Aróstegui, I was surprised to find myself feeling pre-performance jitters. I was sitting up in the attic space of Greenway Court Theater —where LA Escena recently featured a successful weekend of translations and adaptations of Golden Age Spanish theater— and so was nowhere near the action that was about to come to life on stage. Nevertheless, those pesky butterflies-in-the-stomach I knew so well from giving conference presentations, or going through doctoral examinations, made their presence known in the first fifteen minutes of the show. I shouldn’t have been so worried, as the show was as funny and heartfelt as what I had seen at any of the rehearsals in the previous two weeks, but I suppose one of the side effects of dramaturgy is that you become as invested in the success of the performance as any of the actors or directors even if you’re only sitting in the audience.

While I had dabbled in dramaturgy in the past as part of my work with Diversifying the Classics, this was first play for which I had attended entire rehearsals, nearly from the beginning to the end of the process. Thanks in large part to the welcoming nature of the directors, cast, and crew I quickly became part of the decision-making process in creating this performance. My role as the dramaturg was largely to be a tour guide to the comedia as a form and to the social mores of seventeenth century Spain: How much deference should a servant of this status show to their master? Why does Count Próspero just walk into people’s houses? How physical can these romantic moments be given the time period? Why are there so many suitors? One example that illuminates how the directors, actors, and I worked together to fine-tune a performance is in a scene about halfway through the play between one of the female protagonists, Violante, and her would-be suitor don Pedro. Violante, in the middle of her own schemes to marry her long-time suitor Claridán, is exasperated with don Pedro and so promises to teach him how to forget her:

VIOLANTE: Since I cannot believe that you are here again, and I am tired of talking to you,

and I want you to leave me alone, listen to your lessons.

DON PEDRO: I will write them down in this memory-book. There, ready.

The first point is not to think about the person you love.

VIOLANTE: Because if thought slowly comes to embrace her parts, the

soul will go mad. The second is not to see her.

VIOLANTE: Well, it can’t be done if you look upon her. The whole thing

depends on not seeing her. For beauty trips up the firmest

heart and undoes the strongest one. The third one is easier.

VIOLANTE: To find another. And if the first lady was wise, this one

should at least not be foolish. That’s where the lover should

turn his longing; if he’s noble, he’ll pretend well; if he’s in it

for profit, he’ll turn his purse into his pleasure, for that will

rule his soul. Most men are passionate about what they spend

on, not about the pleasures they enjoy. That’s enough for

The rehearsals for this scene went well, with Christian Vunipola’s portrayal of don Pedro already well on its way to the foolish yet charming performance which delighted the audience at LA ESCENA. And yet, despite the skill of both actors and the direction of Jean Carlo and Sylvia, the scene was still not reading as clearly as it might. It was at this point that I offered up some cultural context for the “lessons” as being a fairly close description of the cure for love-sickness given in Bernardus Gordonius’s Lilium Medicinae (ca. 1300; Sevilla 1495). Suddenly, it clicked. The set-up of this exchange as a “lesson” was not incidental, but rather crucial for understanding the scene and the intellectual battle of wits that occurs between the two characters. Camila Rozo locked in her choice to show Violante’s superiority in flexing her wit and intelligence, and Christian more fully understood why don Pedro finds it impossible to forget a woman who can hold her own against him.

In general, I found my role as dramaturg to work this way. Where I could, I provided insight or explanations into how the play engages in a larger cultural context, and especially into why characters make certain choices. As soon as the directors and actors understood the why of what was happening in a given scene, they could more easily make it clear to an audience with their unique interpretations. The importance of why was also a revelation to me as a translator who doesn’t have extensive experience in bringing theater to life; as translators, we often get so caught up in what a character is saying that we don’t often stop to question the why of it. Directors and actors work with a purpose and intentionality that any good translator of theater should incorporate into their practice, and which I’ll be sure to be mindful of in my future work with Diversifying the Classics. The opportunity to collaborate with actors and directors over the years has been instrumental in shaping the practice of the Working Group in Translation and Performance, helping us to develop translations which are ever more performable and exciting.