An Early Modern Double: The Comedy of Errors and The Force of Habit at Cal Poly Pomona - Diversifying the Classics
22100
post-template-default,single,single-post,postid-22100,single-format-standard,vcwb,ajax_fade,page_not_loaded,,select-theme-ver-2.4,wpb-js-composer js-comp-ver-6.8.0,vc_responsive

An Early Modern Double: The Comedy of Errors and The Force of Habit at Cal Poly Pomona

An Early Modern Double: The Comedy of Errors and The Force of Habit at Cal Poly Pomona 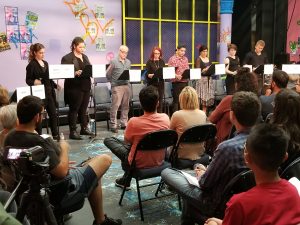 With unexpected reunions of long lost siblings, gender-bending explorations into nature and nurture, romantic triangles, and the constant threat of violence, Guillén de Castro’s 1610 The Force of Habit and Shakespeare’s 1594 The Comedy of Errors bear a family resemblance. On October 1st, members of the Comedia in Performance and Translation working group were fortunate enough to take in this early modern double-header at Cal Poly Pomona as part of this year’s Southern California Shakespeare Festival. Founder and artistic director of the festival Linda Bisesti arranged to follow an afternoon show of Shakespeare’s early comedy with a staged reading of the Guillén de Castro play, organized by Marta Albalá Pelegrín, Assistant Professor of Early Modern Spanish Literature at Cal Poly and working group member. 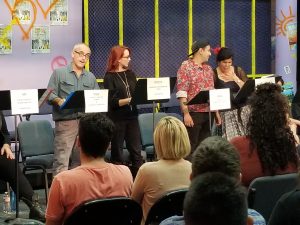 The staged reading, performed by many of the same actors from Shakespeare’s comedy, gave voice to our group’s translation, and the large, standing-room-only audience of students and the local community was able to access this rich drama in English for the first time. The actors, including Bisesti and Cal Poly Theater Department chair Bernardo Solano, immediately brought the spectators into Guillen’s complex and intriguing story of familial conflict and gender identity. 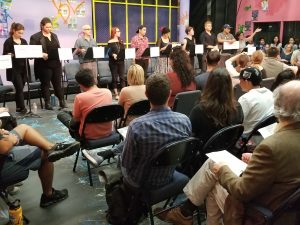 The actors who portrayed the reunited siblings, Hipólita and Félix, deserve extra applause. In Guillén’s drama, the daughter has been raised for battle and dresses in men’s clothes, while the son has been kept at home and taught embroidery. While the overbearing father, Don Pedro, attempts to force his children to adapt to traditional gender roles, Hipólita and Félix refuse—they refuse, that is, until they fall in love. These late scenes of character transition invite current audiences to wonder if the play is essentially a conservative argument for strict gender roles, or a more progressive revelation of the degree to which our gender identities are performances constructed for a social audience. 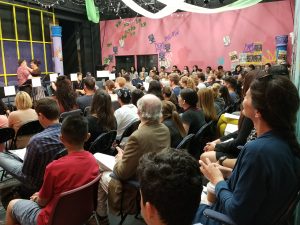 After the reading, the actors took questions onstage, where members of the working group joined them in a rich discussion of the play’s implications. The actors shared their thoughts on why they chose to portray their characters in certain ways. What an audience ultimately thinks about Guillén de Castro’s play depends in part on the violence of the protagonists’ transitions out of the gender identities of their youth, and the most troubling aspects of this early modern work were brought out by the insightful reflections of those who played its characters. 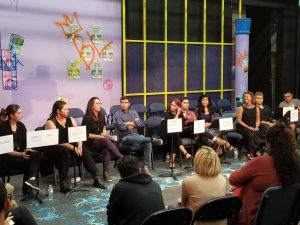 It was both illuminating and enjoyable to participate in that conversation, and the working group is grateful to the wonderful people at Cal Poly for this staged reading. These early modern Hispanic plays deserve a place on stage, and it is a delight to play a role in putting them there. Too many of them have been ignored for too long, but, as the night at Cal Poly reminded us, to retrieve and reimagine them in a new time and tongue is to find that the familiarity of their conflicts, the suspense of their stories, and the richness of their wit remain.