STAGED READING OF THE WIDOW OF VALENCIA IN NEW YORK 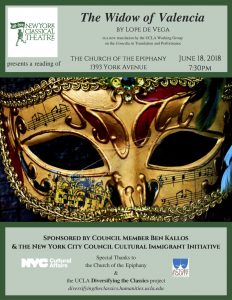 On June 18, 2018 at 7:30pm at the Church of the Epiphany (1393 York Avenue), New York Classical Theatre will present a staged reading of our translation of Lope de Vega’s The Widow of Valencia. Stephen Burdman directs this performance of Lope’s play about female autonomy, the social constraints on love, and the performativity of gender roles. The reading is sponsored by The New York City Council Cultural Immigrant Initiative and city councilmember Ben Kallos. Entrance is free.

WORLD PREMIERE OF THE BLADE OF JEALOUSY BY HENRY ONG 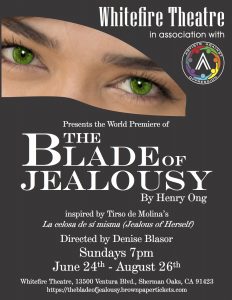 The Blade of Jealousy, Henry Ong’s adaptation of Tirso de Molina’s La celosa de sí misma, will be playing at 7pm every Sunday from June 24th to August 26th, at the Whitefire Theatre in Sherman Oaks. Directed by Denise Blasor, Ong’s play dramatizes in modern-day Los Angeles Tirso’s exploration of how social circumstances affect self-identity and the capricious nature of love. Blade, first developed as part of the UCLA Golden Tongues initiative to adapt the comedia to contemporary LA, demonstrates the lasting relevance of the questions that the Spanish playwright explored four centuries ago.

For an interview with the playwright, https://better-lemons.com/featured/playwright-henry-ong-sharpens-his-blade-always-aiming-to-pay-it-forward/

Boni B. Alvarez’s FIXED was originally commissioned for the second “Golden Tongues,” a festival of Golden Age adaptations at the UCLA Clark Library, organized by the Center/Clark in conjunction with Playwrights’ Arena. A staged reading at the Clark in Summer 2014 was warmly received.

Inspired by El médico de su honra (The Doctor of His Honor), Pedro Calderón de la Barca’s 1637 play about jealousy, power, and revenge in medieval Spain, and Paris is Burning, a 1990 documentary film about “ball culture” in New York’s LGBTQ community, FIXED explores themes of love, honor, identity, and social conflict through the story of Miracles Malacañang, a transsexual masseuse in the Historic Filipinotown of Alvarez’s hometown of Los Angeles.

FIXED will premiere this fall with the Echo Theater Company at the Atwater Village Theater, in a production directed by Rodney To.

Be a part of the 20th Anniversary Season of the Echo Theater Company, Los Angeles’s “best bet for ballsy original plays” (LA Weekly)! Come see the latest chapter in what Rodney To calls Alvarez’s “provocative,” “unique and daring” work: “a tragic love story.”

Tickets are $34 on Fridays, Saturdays, and Sundays, and $20 on Mondays.

For information and to purchase tickets, visit www.echotheatercompany.com, or call (310) 307-3753.

“At a time when Shakespeare’s plays are being televised to millions thanks to the British Broadcasting System and P.B.S., it is gratifying to know that the dramas of his Spanish contemporaries also have some opportunity where their theatrical expression before the public is welcomed and realized.” So wrote Donald Dietz, a professor of Spanish at Texas Tech University in 1979, after his visit to the 4th annual Siglo de Oro Drama Festival at the Chamizal National Monument (El Paso, Texas). Considering Shakespeare’s remarkable popularity in any number of cultural contexts — from high school classrooms to international festivals, and films as well as television — Professor Dietz’s observation still holds today: there are precious few venues in the U.S. where one can take in a play by Félix Lope de Vega or Pedro Calderón de la Barca.

Every year since 1976, theater companies, theater lovers, and scholars from around the world have gathered in El Paso to celebrate Spain’s Golden Age of theater, which spanned the 16th and 17th centuries and included not only Lope and Calderón, but Miguel de Cervantes and Tirso de Molina, the first to put Don Juan on stage. According to Susan Paun García, professor of Spanish at Denison University and president of the Association for Hispanic Classical Theater (AHCT), in the United States Chamizal is “the first festival of its kind – and [the] longest-running” to pay homage to Spain’s “enormous wealth” of classical theater, which was produced at the same time as Shakespeare’s, and predates France’s greatest era of theater (including Molière, Pierre Corneille, and Jean Racine), serving as inspiration for some of France’s best works, such as Corneille’s The Liar – based on Juan Ruiz de Alarcón’s The Suspicious Truth.

The festival was conceived by Franklin Smith, the first superintendent of the Chamizal National Memorial, as a way of commemorating the U.S.’s bicentennial (1976) and, in the words of Walker Reid (a retired director of cultural affairs at Chamizal) “of fostering a positive relationship” between the U.S. and Mexico, particularly following the resolution, in the 1960s, of a century-old international border dispute over some 600 acres along the Rio Grande, called the Chamizal. Since its inception, the festival has become a mainstay in the area, and an annual recognition of the region’s Hispanic heritage. Always popular with people from near and far, it is now, for park ranger Gina Hernandez, “its own establishment,” with many locals who grew up with it attending with their own kids. And it has been an international affair from the start, with actors from Mexico, Puerto Rico, and Spain, and with more recent contributions from Colombia, the Dominican Republic, and the United States.

What has changed over the years? Today, the festival is truly bi-national, with parallel events in Ciudad Juárez, Mexico, just across the border from El Paso. It has also added an educational outreach program, which takes the plays into community schools. Pablo Jasso, a theater teacher at Bel Air High School (El Paso) has his students perform a Golden Age play every year and attends Chamizal’s performances with them. So, although Donald Dietz’s observation of Shakespeare’s predominance still rings true, for more than 40 years the Chamizal National Monument has done its part to diversify theater-goers’ options, with, as Professor Dietz put it, most gratifying results.