The Comedia in Translation and Performance Working Group and Diversifying the Classics is pleased to announce the successful completion of our first summer grant period supported by the Pine Tree Foundation of New York.

The Pine Tree Foundation’s generous two-year grant is aimed at expanding the “Library of Translated Hispanic Classical Plays,” which is home to the working group’s original translations and serves as an online resource for theater practitioners and others interested in the Spanish comedia. In summer 2017, funding from Pine Tree provided stipends for four graduate students to increase and improve the Library’s holdings. (Two more graduate students will receive stipends in summer 2018.) Coupled with an award from the UCLA Arts Initiative—which supported three additional graduate students in an ongoing collaboration with the UCLA School of Theater, Film and Television—the working group was able to greatly advance their work in terms of both publications and outreach.

Thanks to the Pine Tree grant, the working group was able to edit and annotate its translation of The Widow of Valencia, which was drafted during the academic year, and to write an introduction aimed at theater practitioners as well as students and scholars working in English. The process included intensive table-readings and detailed cooperative editing. Widow will be posted on the Diversifying the Classics website for open access, and published in hard copy by Juan de la Cuesta – Hispanic Monographs.

Widow will also receive a dramatic reading in November 2017 (date TBA). This activity is part of Diversifying the Classic’s durable collaboration with UCLA’s Department of Theater, through which, in the fall quarter of each academic year, first-year MFA students perform the working group’s latest translation. The performance not only assists the working group in communicating directly with the actors and fine-tuning the translation, but also helps theater practitioners-in-training to become acquainted with the corpus and discover “what lies beyond Shakespeare.”

In addition to their work on Widow, graduate students were afforded the space to improve earlier translations (A Wild Night in Toledo, Unhappily Married in Valencia, and What We Owe Our Lies) by submitting them to rigorous new table-reads, carefully incorporating feedback from previous dramatic readings in the Department of Theater, and ensuring that each facing-page translation strictly adheres to the group’s style guide, which was likewise fine-tuned over the summer. Juan de la Cuesta will also publish these translations, as well as 90 Monologues from Spanish Classical Theater, an anthology for actors who—like UCLA’s MFA students—wish to diversify their corpus by incorporating the comedia, a largely untapped resource in English-speaking theatrical circles.

Additional areas of research, collaboration, and outreach focused on undergraduate and K-12 education. Graduate students advanced their partnership with About…Productions, a local theater company, by completing a 12-session high-school level unit on Spanish comedia and Guillén de Castro’s The Force of Habit. This will be published on the Diversifying the Classics website and feature toolkits for exploring the world of early modern Spain as well as current discussions about gender identity, which is the subject of this timely and relevant play.

Grant recipients also worked with the UCLA departments of Arts Education and World Arts and Cultures to design a hybrid literature/service-learning course, the syllabus for which is currently under consideration for implementation in the 2017-2018 academic year. In this course, UCLA undergraduates would study early modern comedia alongside modern performance practice and theory, such as Augusto Boal’s Theatre of the Oppressed (TO), and then design complementary curricula to be implemented in local middle schools.

A partnership between graduate student grantees and faculty at Cal Poly Pomona resulted in a dramatic reading of The Force of Habit, which will take place on October 1, 2017 as part of this year’s Southern California Shakespeare Festival. This follows a previous co-sponsored event at Cal Poly: a workshop entitled “Diversifying the Classics: Translating for Performance” (held on May 2, 2017), which was attended by approximately one hundred students and faculty and featured presentations and discussions led by Barbara Fuchs and several members of the working group.

Graduate students also laid the groundwork for future performances in Los Angeles by establishing contact with companies and performers in Spain and Mexico; built relationships with theater practitioners involved in Encuentro de las Américas, a bilingual festival of arts and culture in which the working group hopes to participate; identified and reached out to faculty from other Southern California campuses whose research and service dialogues with the working group’s; and published several blog posts, ranging from engaging book reviews to inspiring pieces on dramatic forms and drama festivals.

Finally, the summer 2017 stipends supported research and preparation for the working group’s next translation, Pedro Calderón de la Barca’s Amar después de la muerte (To Love After Death) (1633). This play was chosen in response to strong interest expressed by Spanish and U.S. theater practitioners in its themes and content—namely, inter-ethnic and inter-religious conflict and conciliation. Set during a rebellion in 16th-century Spain, this will be the first tragedy and historical drama translated by the group.

We thank the Pine Tree Foundation and its director, Szilvia Szmuk-Tanenbaum, for supporting our mission, our work, and our students—and we look forward to another productive Comedia Summer in 2018! 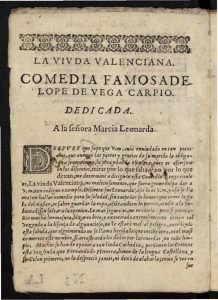 The Comedia in Translation and Performance working group recently received some fabulous news: the Pine Tree Foundation awarded Diversifying the Classics a grant that will allow us to complete the translation of two more Golden Age plays between now and the summer of 2018!

The funds will specifically support graduate students from the working group who will spend their summers editing, annotating, and writing introductions to plays that underwent draft translations during the 2016-17 and 2017-18 academic years. These students will also prepare the plays for publication (in print and online) and for their debut performances in UCLA’s Department of Theater (a fall quarter tradition).

The first of these plays, which is currently being workshopped, is Lope de Vega’s The Widow from Valencia (La viuda valenciana, c. 1595-1600). The play begins with Leonarda rejecting a series of potential suitors in order to protect the freedom she gained with her husband’s death. But, when she discovers that disguise can offer its own freedoms, she engages in a clandestine affair from behind the protection of her veil. Lope presents us with a balancing act of visibility and invisibility, liberty and imprisonment in the pursuit of personal desires.

Thank you to the Pine Tree Foundation and to its director, Szilvia Szmuk-Tanenbaum—a passionate scholar and supporter of the Spanish Golden Age comedia—, for making our project possible!