Announcing the next Golden Tongues - Diversifying the Classics
23727
post-template-default,single,single-post,postid-23727,single-format-standard,ajax_fade,page_not_loaded,,select-theme-ver-2.4,wpb-js-composer js-comp-ver-6.6.0,vc_responsive
August 8, 2020 In Uncategorized

Announcing the next Golden Tongues

The King of Maricopa County, by Mary Lyon Kamitaki, is an adaptation of Lope de Vega’s El castigo sin venganza (Punishment without Revenge). In present day Arizona, near the border with Mexico, the politically conservative sheriff is up for reelection. His daughter from a previous marriage and his new wife are brought together by destiny: a car collision far out in the Arizona desert, in the middle of a thunderstorm. Their forbidden love, discovered by the vengeful sheriff, sets in motion a tragic series of events that shows the horrific consequences of power run mad.

Julie Taiwo Oni’s riff on Miguel de Cervantes’ Retablo de las maravillas (The Marvelous Puppet Show) reimagines the anxieties around social and cultural belonging in the space of a rapidly gentrifying South LA. In The Woodingle Puppet Show with Host Mr. C, as Constructed by Mr. Asinine with Calculations and Articulations of the Genius Sort, Oni explores questions of Blackness, and the hoops people are willing to jump through to prove that they are “black enough.”

Inda Craig-Galván’s What We Pay For Likes transports the squabbling, reputation-obsessed aristocrats of Madrid from Juan Ruiz de Alarcón’s Los empeños de un engaño (translated by our Working Group as What We Owe Our Lies) to a Calabasas populated by influencers whose lives revolve around their brands and social media views. When a handsome stranger comes to town, their relationships IRL turn out to be much more complicated than their polished profiles suggest.

This year’s Golden Tongues will be seen at our 2020 LA Escena Festival, hosted by A Noise Within. Keep an eye on our website for more information, coming soon. 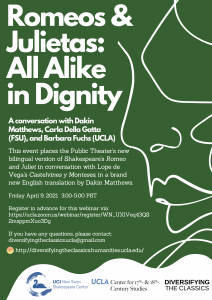